Sledge hockey, also known as Para Ice Hockey is a popular winter Paralympic sport with many similarities to ice hockey. It is an inclusive sport that allows those with physical impairments to play ice hockey. Instead of skates, players use a sledge with hockey skate blades on the bottom.  The sticks used in sledge hockey have a curved blade similar to ice hockey sticks but have metal teeth at the opposite end to dig into the ice for steering and propulsion. 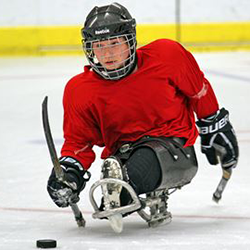 On Viasport
Yes (SportAbility BC)

On Viasport
Yes (SportAbility BC)

On CPC
Not for Victoria Local Program