skiing includes both skiing and biathlon in the Paralympic world.  As is the case for alpine, there are for leg and arm impairments, sit skiers and for the visually impaired. Races are held in distances from one to 20 kilometres along with relays in both sports.

skiing involves short, middle and long distances, ranging from 2.5 km to 20 km, or participate in a team relay using either classical or free techniques.

Biathlon combines cross-country skiing and rifle shooting, but Para Biathalon differs from Olympic biathlon because skiers must always shoot from a prone position. Athlete start times are staggered by a interval system.

Biathlon is divided into short-distance and long-distance. In short-distance, skiers race around a 2-5km loop, stopping twice to take five shots at a target placed 10m away. Long-distance is similar but skiers must complete five trips around the loop, stopping to shoot four times. For the shooting portion, skiers with a visual impairment use an beam system including a that plays a varying acoustic signal to indicate when they are on target. The higher the pitch, the closer to the of the target. 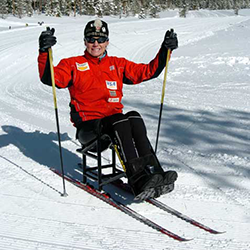 On CPC
Yes (Disabled Skiiers Association of BC)