Goalball is a sport exclusive to athletes with visual impairments, played by both  men and women. Played in a gym court, the objective of the game is to throw the ball using a bowling motion into the opponent’s net while the opposing players try to block the ball with their bodies. The 1.25 kilogram ball has noise bells which help orientate the players.

It is an intensely unique spectator sport given the venue atmosphere and extreme concentration and silence required by the athletes.

Each team is comprised of six players with no more than three players per team (one centre and two wingers) permitted on the court at any one time. Goals are scored by rolling a ball (called a goalball) toward the opposing team’s net which spans the width of the court at each end.

Goalball is played on a court with tactile markings to enable players to determine their location on the court and the direction he/she is facing at any time. Silence during playtime is critical to allow the players to listen, concentrate, and react. 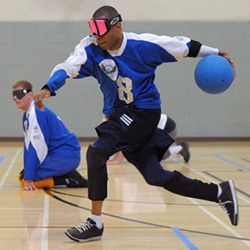